Our Vn function has time and space coordinates running diagonally, meaning that their axes are in every direction at 45º to the absolute axes (1,j,j2,i,ij,ij2). Here is the 6-dimensional generating function:

We can rewrite this as function U with more familiar space and time coordinates: 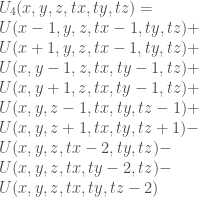 Here is a lattice of spheres representing unique points in a 3-dimensional cube. Were our coordinates to be aligned with the absolute axes, the green and blue spheres would be valid points, but since our axes run on the 3d diagonal subsequent generations will always be either only blue or only red.

Mathematically expressed, the sum of the coordinates x+y+z+tx+ty+tz must always be even (or always odd) to yield a valid coordinate, so in consecutive generations we will yield first only the red points and then only the blue points..

A 6d universe would have 3 time dimensions and 3 space dimensions. At each point there is a 6-dimensional number, collectively these vectors can be seen as a field.

Here is a visualisation of the vectors in one particular space at  time (tx, ty, tz). There is an offset rectilinear grid of points, at each point the 6-dimensional vector is represented as two 3-dimensional vectors, one red and one blue.

These vectors could be interpreted as electric and magnetic components of the electromagnetic field.

A vector can rotate smoothly in a complex plane as shown in the next diagram which shows 6 consecutive generations.

A vector could also flip 90 degrees every generation:

This flip appears as if the vector has been multiplied with j in each subsequent generation.

The behaviour of a vector, whether smoothly rotating, flipping or doing something else, is dictated by the pattern of nearby vectors.

Now we are ready to describe the patterns that we expect to see.