Complex systems with the same formulae and the same starting conditions run identically. If even a very small difference between them is introduces they diverge very quickly.

Imagine our world was indeed symmetrical like the Mandelbrot set and that for each particle in our world there is an exact antimatter particle on the other side of the universe behaving exactly the same. This would mean that you too, are duplicated at the other side of the universe, made up out of antimatter. How many different bodies of you exist then? The answer is 2 of course. They are mirror images of each other but otherwise identical. How many ‘minds’ of you exist though? The answer to that is one. Each neuron in your brain fires in exact synchronisation with the corresponding neuron of the anti-you. In fact from the inside, the “you” and “anti-you” are completely indistinguishable. You have no way of determining whether you live in on the matter or anti-matter side of the universe because you live in both at once.

As a second example imagine that we have 2 computers running a program to demonstrate fractal or chaotic effects, let’s say, for example, that we are running a program that simulates the gravitational attraction of 3 bodies orbiting each other. Now we start both programs with exactly the same initial conditions and using the same formulae at the same time. What will happen? The two programs will run totally synchronously and will be indistinguishable from each other.

However now let us change the trajectory of one of the bodies a tiny amount. It is typical of chaotic systems that this small change will make the two simulations diverge radically after a very short time.

Now let us look at these systems inside our own heads.

Let us pretend that our universe is completely deterministic.

In the next picture we show a computer, which interacts with the outside world through some I/O. The software running on the computer is a disembodied entity that only exists as information.

Similarly the observer in the picture has a body including a brain (hardware) and senses (I/O) but its mind is again disembodied information.

The mind is to the observer like the software is to the hardware it runs on. Being invisible, the mind is shown as a cartoon thought-bubble in the illustrations.

Each observer experiences the world through his  senses and creates a model of the world in his head based on that input. Many observers on different timelines, which would appear to be physically different, looking from the outside, have minds working in perfect synchronisation as long as their sensory data input is the same.

Consider this example. Here we have 3 worlds, totally identical, each containing an observer, who is contemplating a sphere: 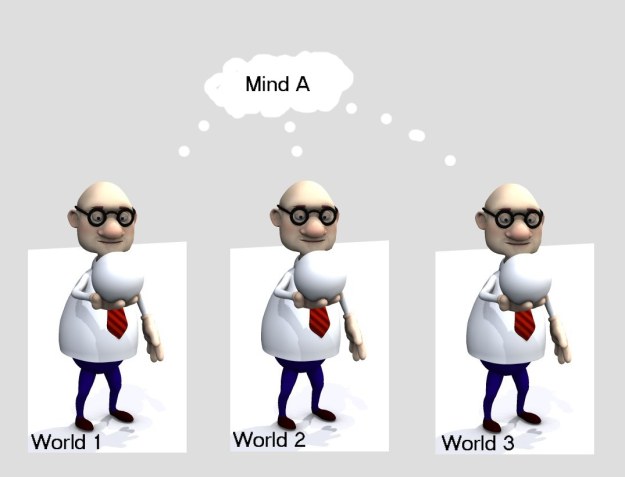 Looking in from the outside there are clearly three bodies of the observers, but there is only one single mind. All three observer bodies are in the “mind A” state. There is no way for an observer to work out in which of the 3 worlds he lives in.

Now let us consider the case where one of the worlds is different.

World 1 and 2 are identical, but world 3 now also contains a blue cube, which the observer looks at. Looking from the outside we still see three observer bodies, but this time there are two observer minds. In worlds 1 and 2 the observers share the same state “mind A”, while in world 3 the observer is in state “mind B” because a different sensory input in world 3 than in the other 2 worlds.

We can also get shared mind states in non-identical worlds. Consider this situation:

Here we have three worlds. They are non identical, you can see a blue cube in world 2 and a red sphere in world 3.

The minds only diverge when differing information reaches them.

This sounds strange, but is really quite straightforward and explains many of the puzzling quantum world oddities.

Multidimensional time from the inside

Now let’s apply the multiple time concepts to an observer living in a world with multiple time axes. Imagine we are an observer in a world where Schrödinger is in a hermetically sealed box (shown here with one wall cut away). Now along one path through the time dimensions Schrödinger dies, however this is not discovered until the box is opened. ‘When does Schrödinger die?’ In one time path he does not die at all, in the other he does so while he is in the box. In which world does the observer exist? In both at the same time until the box is opened. If there is absolutely no information leaking out from the box, then it is totally irrelevant to the worlds of the observers if Schrödinger was alive or dead, and the brains of the observers in the timelines would run in total synchronisation. Only when their worlds diverge, i.e. when the box is opened, do their states diverge. Here is a diagram showing the state of Schrödinger (with bow tie) and the observer (with glasses) at 3 times, t1, t2 and t3:

At t1 Schrödinger is locked in the box. At t2 he is still alive in one time line and dead in the other (killed by a poison phial breaking triggered by a nuclear decay event).

Although for Schrödinger the worlds at t2 are very different, for the observer they are identical, as long as no information about Schrödinger’s demise or survival leaks through the closed door. So, even though there are two bodies shown for the observer at t2, there is only one mind, because the brains in the bodies of the observer are running in perfect synchronisation.

At time t3 the observer opens the door and discovers Schrödinger’s fate. Finally different information enters his mind in the two worlds and the minds diverge.

So for Schrödinger, there are 2 different worlds already at t2 (ignoring the fact that he is dead in one of them), but for the observer the world timelines only diverge at t3. The alternative view, which insists on only one observer and only one time dimension and that concludes that Schrödinger is in a superimposed dead-and-alive state between t2 and t3 until the observer looks at him (and thus ‘collapses the wave function’), appears ridiculous.

Action at a distance

Here we apply the principles from the previous chapter to a particularly perplexing quantum phenomenon and we explain how it appears that observing something alters the outcome of the experiment. The observation has no effect on the experiment, which happens in all possible variations in multiple worlds. Until information about the outcome reaches the multiple copies of the observers they share the same mind state, only when different information reaches them do they diverge.

In some thought experiments (e.g. the Einstein, Podolsky and Rosen experiment, or the Bell inequality) a pair of particles with opposite spin is created. Then the particles are separated by a large macroscopic distance.

The diverging mind states of the observer only explains half of the EPR experiment, so we illustrate the explanation with fake red and green particles rather than particles with uncertainty in their spin.

Imagine an experimental apparatus in the middle of a work bench that shoots out an invisible pair of particles, a red one and a green one. We are following two timelines (shown side by side), one where the green particle is emitted to the right and the red to the left, and one the other way round.

The two particles are received by a pair of detectors, which shows the colour of the particles after a short processing time.

In the diagram below we are at the beginning of the experiment. Both worlds (in the two timelines) appear identical:

Zap. Now the particles are emitted. The worlds appear different, because the particle detectors have received the different particles, but this information has not got through to the observer yet. The observer’s brains and mind are in an identical state in both worlds:

Now the detectors light up and the observer perceives where the particles end up. We can no longer speak of a single observer because the minds of the observers in the two timelines have now diverged:

What this means is that the inflation in the numbers of observers along multiple time axes is not as big as it appears at first.

The uncertainty is not in the particles, but in the minds of the observers across multiple time dimensions.

Let us labour this point some more. In this picture we have three parallel worlds and time running down.

At the beginning nothing has been determined and all three worlds are identical, including the mind of the observers.

In the middle the worlds are different. In the first two the right detector found a green particle, in the last world a red one. The detectors have not lit up yet however, so all observers still share the same mind state: “mind state A”.

In the final time, at the bottom, the detectors light up and the information about the outcome reaches the observer. The mind state of the right hand observer diverges to “State R”, while the first two observers still share the mind state “State G”.